Farmhouse at Caprese Michelangelo
Travelling around

Our Farmhouse is located at Caprese Michelangelo, in an area which dominates the Tiber Valley. 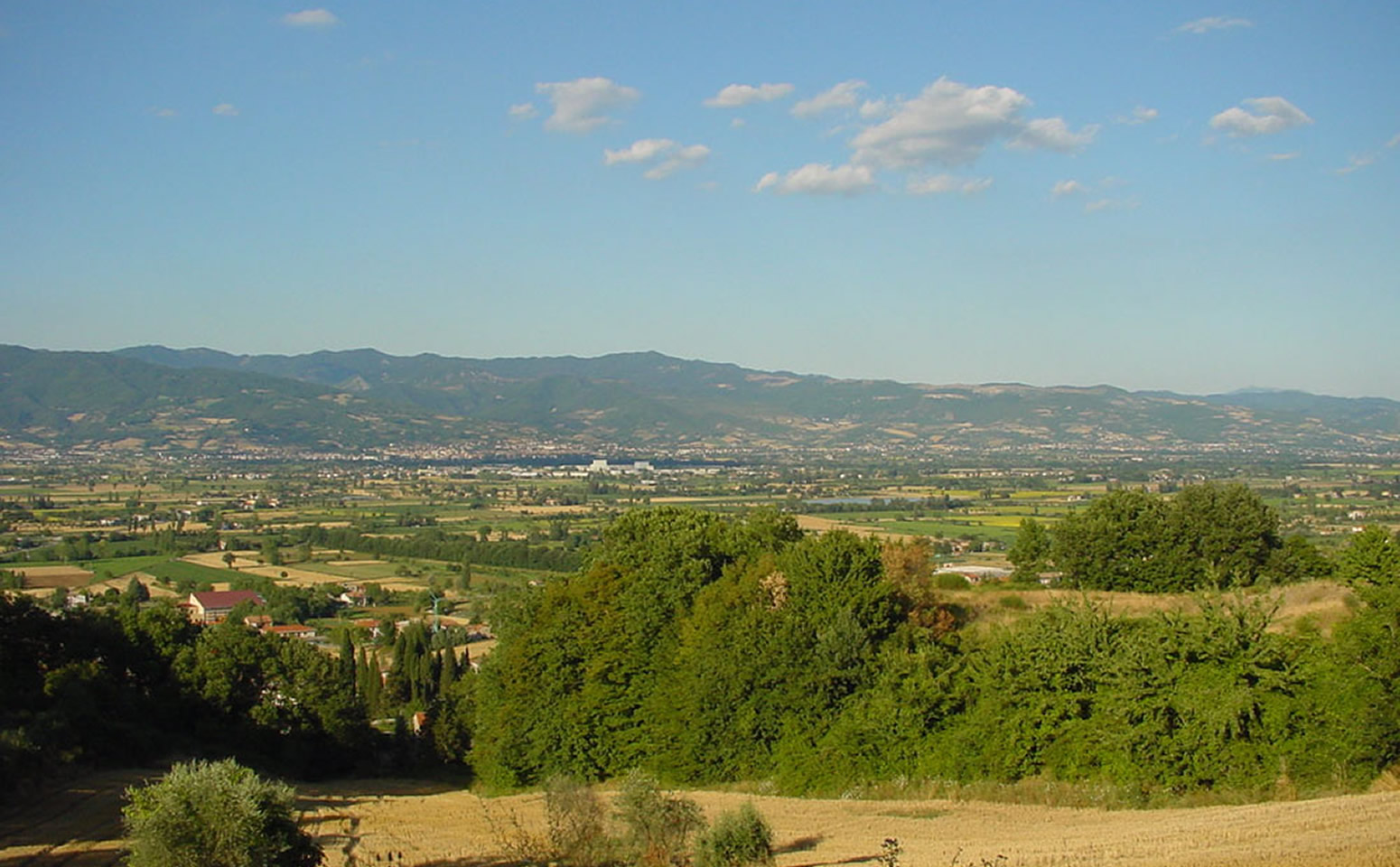 The Tuscan valley Valtiberina is not so well-known and advertised as other places in Tuscany are.
This might be the reason why it has such a peculiar charm. Towns are not packed with tourists and the local people are still genuine. Still, this does not mean that this area is not rich in culture and art.

Beyond giving birth to Michelangelo Buonarroti and hosting the Museo Michelangiolesco which displays some of his works, Caprese has many ancient pievi and churches from the Middle Ages, hermitages hidden among old chestnut and beech woodlands and evidence showing that the Langobards and St. Francis have been here.
Some people have been looking for the tomb of Totila for years; some others have found Palaeolithic settlements.

Anghiari, not far from Caprese, is a perfectly preserved medieval town; Sansepolcro, also in the surroundings, hosts works from Piero della Francesca; La Verna has a beautiful sanctuary. These and many others are the places You will get the chance to discover.
These places recount more and less famous stories about battles, hermitages, old peasants' traditions, poets, literature and forests.

Thanks to its museums and its food traditions, to its everlasting buildings made of stone and wood and to its untouched green forests, this land will surprise you, intrigue you and seduce you.

This lush corner of Tuscany focus many historical and cultural centers where are organized events and festivals of all kinds throughout the year: from markets and festival dedicated to the traditional craftsmanship and culinary of the tows of the Tiber Valley and the Arezzo's territory, to country fairs, and to popular outdoor music concerts in spring and summer.

The most valuable and typical product from Caprese is marrone, a type of chestnut with a particularly large size and taste sweet and flavorful.

The cultivation of "marrone" chestnut in our area was already an important resource in Roman times, the practice has since been established and fostered by the Benedictine monks in the late Middle Ages and for centuries chestnuts, chestnut flour and then the polenta (and pigs that were grazing in the chestnut at the end of the harvest) have fed the people of Caprese instead of grain and bread.

The "Marrone di Caprese Michelangelo" received the protected designation of origin and the country celebrate every year this valuable and delicious fruit in two weekends of October with the Chestnut Festival, where you can enjoy many sweet dishes with chestnuts, chestnut flour, and find many other typical products. Visitors in this period can experience the warm hospitality of the villagers and participate in activities planned for the festival. 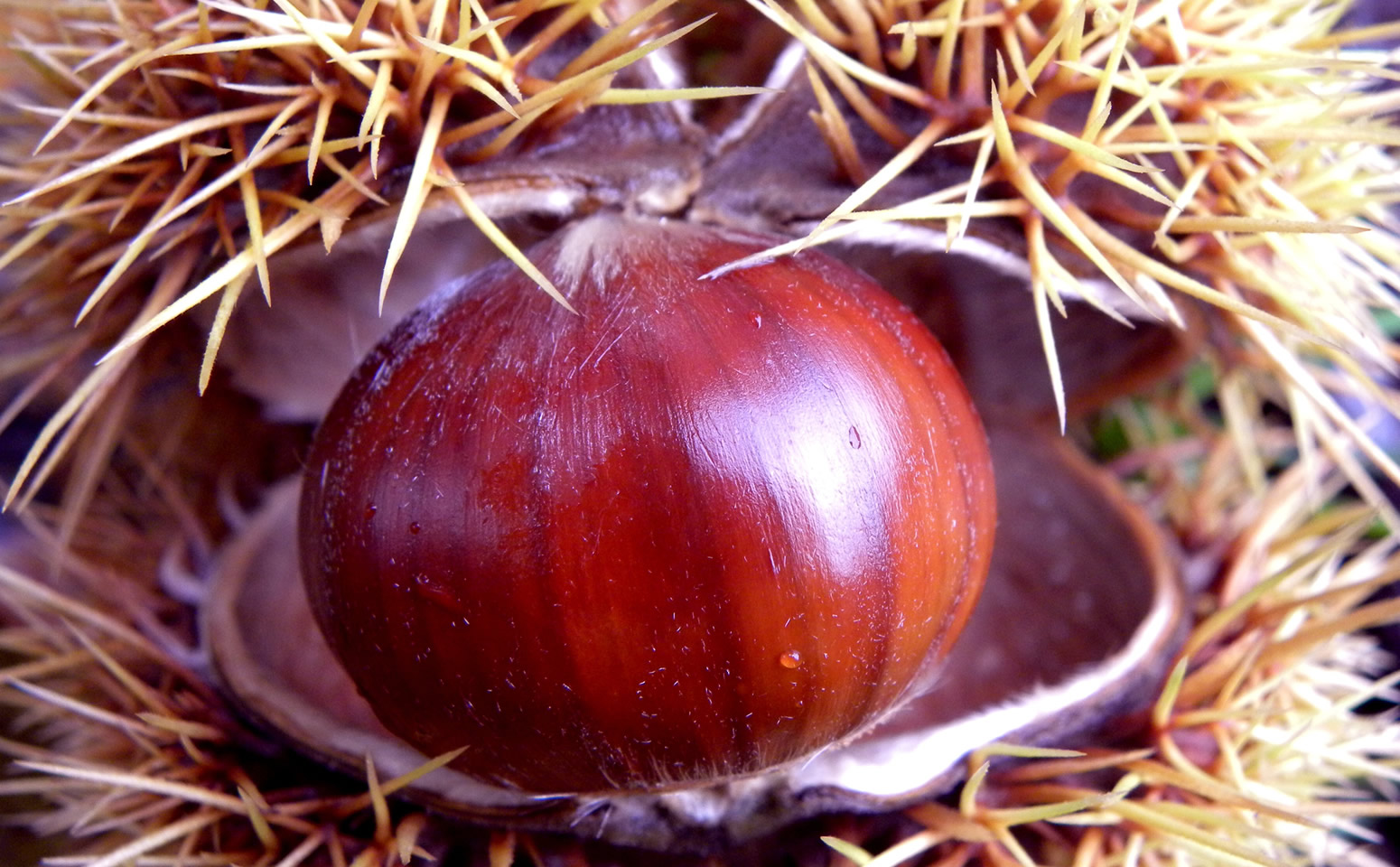 Villages of the Tiber Valley

Green for the threes, oaks, hazelnuts but especially the famous chestnut, Caprese Michelangelo is located in the Catenaia Alp (in the Appennine mountains, at the top is 1415 metres), at 653 meters above sea level and it's territory is crossed by numerous rivers that flow into Singerna and from there in the most famous Tiber.

The chestnut, also called "the bread tree", occupies an important place in the history of Caprese and its inhabitants, and every year, in autumn, it brings together people from all the valley, thanks to the famous festival "festa della Castagna".
But if are the fruits of the woods to make rich the country, it is its most famous son to make it known in the world: the great artist Michelangelo Buonarroti was born here and, thanks to a Royal Decree of 1913 gave its name to the town.

The history of Caprese Michelangelo, however, begins much earlier, and it is attested by the archaeological finds from Bronze Age in the excavation close to Tifi, demonstrating that the area was vital since before the Etruscans age first and Romans age after. Studies of prominent historians identify the Castle of Caprese Michelangelo as the place where the king of the Goths Totila, died in 552 AD.
Subsequently, the family Guidi di Romena took possession of the territory from 1260 to 1324, when the bishop of Arezzo Guido Tarlati conquered the castle, while in 1383, after decades of anarchy, the people of Caprese made a voluntary commitment to the Republic of Florence.

Michelangelo Buonarroti was born here in 1475, while his father Ludovico held the power. In its memory, the Palazzo del Podestà, birthplace of the artist, has been transformed in the Museum "Michelangiolesco" which contains reproductions of his sculptures and fine works of important contemporary sculptors.

You can also visit the church of San Giovanni, as well as the castle walls, the Clusini palace, which is now the town hall, the halls of the Rock, which contains plaster casts donated by the Florentine Museum Galleries and the charming Outdoor Sculptures.

The greatest pride of the village of Caprese is undoubtedly to be the birthplace of the great artist Michelangelo Buonarroti, and from 1913, after removed any doubt about the event with detailed studies in the Florentine archives, the name of Caprese is officially accompanied by the name of the artist.

Michelangelo was born in the Castle of Caprese at March 6, 1475, while his father Ludovico were managing the town on behalf of the Florentine Signoria, and was baptized in the church of San Giovanni, near the Castle.

Today you can visit the building where Michelangelo was born.
In the castle there is also the museum dedicated to the artist with sculptural works by important artists of the '900, and the room with old plaster casts won from the Florentine Galleries.
Recently it was added a little charming Italian sculpture section from the 800 and 900.

Listed in the inner circle of the beautiful villages of Italy, Anghiari dominates the Tiber Valley with its medieval walls and fortresses.

Known since antiquity, in a borderland where it helped to hold high the flag of Tuscany, it was the protagonist of the famous battle between the Tuscan Granducato and Milanesi painted by Leonardo da Vinci in the famous fresco "La battaglia di Anghiari" (The Anghiari' battle) in Palazzo Vecchio at Florence, now lost.

Big and small story are so intertwined in the narrow streets, hidden gardens, in churches cramped but full of treasures to discover.
The urban layout has remained intact over the centuries, gathered around the steep "wrinkle" the narrow road that go through the village making it unique and unmistakable, and dotted with craft shops, antique shops and restoration laboratories.

The Traditional Handicraft Exhibition that every year fills the country with tourists and fans helped to make known to many the magic of the village, with its spectacular views and the ancient atmosphere, but also the richness of the surroundings in which churches and castles dot the wooded and unspoiled landscape. But Anghiari is not a country bent on the past and its vibrant cultural life of theater, folk traditions and love for literature are its witnesses. Just as the rich cuisine, genuine and full-bodied, reflecting the full nature of its inhabitants.

Situated in the extreme border of Tuscany with Emilia Romagna, Pieve Santo Stefano is now known throughout Europe as the "Diary City".
Thanks to the idea of the journalist and writer Saverio Tutino, it was established here in 1984, unique in its kind, the National Diary Archive that collects thousands of diaries, memoirs and letters.

The origins of the country are very old and it found traces of Neolithic and Bronze Age, while in Roman times was an important step, as evidenced by the ruins of bridges built in the villages of Formole, Pozzale, Consuma and Sigliano (where it was one built with five arches).

In July of 1656 "it was proposed a devotion of all the people to go in procession on the eve of the Nativity of the Blessed Virgin Mary of the Enlightenment for the next ten years."
Four centuries have passed, but the villagersi, with undiminished enthusiasm and devotion intact, at September 7 and 8 continued to go in procession.

Sansepolcro welcomes visitors in a special way, with the towers of its churches, the roofs and the pinnacles that draw in the sky an unique skyline, in the background the hills so beloved to its most famous citizen, Piero della Francesca.
A landscape that the eye of the observer will find in the works of the master of light, who loved his village till draw and build his house in it, which now is the office of the foundation that bears his name.

Developed around an old chapel that preserved the relics of the Holy Sepulchre (hence the name) the city retains some medieval buildings and the original urban structure, but over the centuries has been enriched with Renaissance palaces and buildings that have graced its aspect.

The heart of the city is the old square "Berta's Tower" which was mutilated of the tower in the Second World War, and where is held every second Sunday of September, the famous Palio della Balestra, commemorations of the Renaissance world in which Piero lived and that he portrayed in his works (the costumes of Palio are copies of the ones in Piero della Francesca's frescoes).

Close the square is the Cathedral, that contains the "Holy Face", a wooden crucifix from the Carolingian era of exquisite workmanship and object of great popular devotion, and the Palace of Lauds, office of the town with elegant lines drawn by Vasari. The Civic Museum, in the nearby, is a treasure chest which contains the most famous work of Piero, that Resurrection so complex and symbolic to have become his most famous work and symbol of the Village, along with an intense San Giuliano, a maternal Madonna of Mercy and a mystic St. Ludovico.
Churches and palaces dot then the whole country, fascinating the tourists who want to take a walk through the streets of the village, and offers surprises like the painting of Rosso Fiorentino preserved in the church of San Lorenzo, or the franciscan Montecasale's monastery in the hills overlooking the valley.

Monterchi dominates the valley below, giving visitors a unique spectacle.
Its name derivate from the name of the ancient hill where is located: Mons Herculis (Mount of Hercules).

Whit its clear medieval imprint, Monterchi will amaze you with its narrow cobblestone streets, where you can find small shops and characteristic eateries.
But Monterchi is universally known for the famous fresco "Madonna del Parto", painted by Piero della Francesca in 1459 in honor probably to his mother.
Skillfully and completely restored in 1992, the fresco is visible today in the small museum dedicated to it even without a reservation.

Visiting Monterchi is therefore absolutely not to miss, in addition to Arezzo and Sansepolcro, for lovers of the works of Piero della Francesca.

One last curiosity of the country is the "museum of weights and measures", the only one in central Italy, housed in the Palazzo Massi, where there's a rare collection of measuring instruments, such as precision scales, previously used for scientific experiments, and illustrated by extensive explanations.